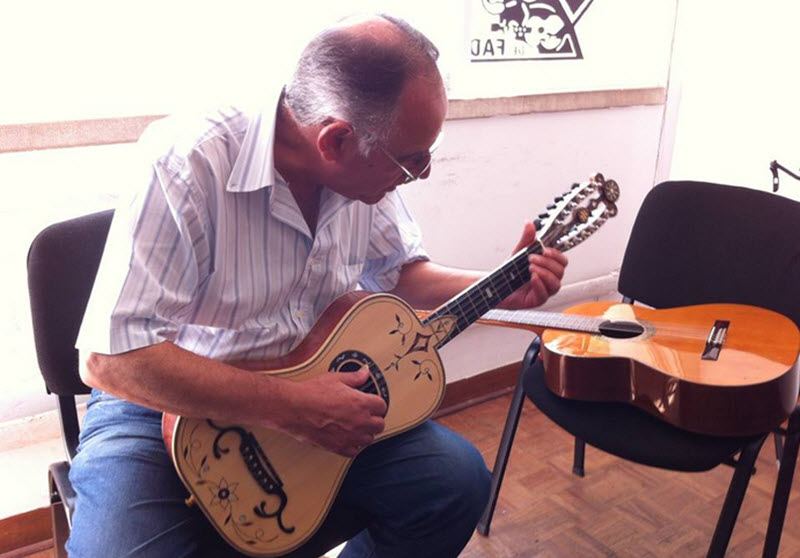 The Viola Toeira is a steel-stringed musical instrument from Portugal, with 12 strings in 5 courses. It is essentially a larger version of the viola braguesa, another Portuguese string instrument.

The name toeira is a reference to the strings used on the third course.

Characteristics of a viola toeira:

As with most Portuguese violas, the bridge and saddle are separate.

The Viola Braguesa is a steel-stringed musical instrument from Braga in northwestern Portugal. It has 10 strings in 5 courses.

A standard viola braguesa has a scale length of roughly 50 cm.

As with many other Portuguese violas, it is available in a smaller requinto version in addition to the standard size. The viola braguesa requinta is tuned a fifth above the standard viola braguesa, i.e. A4/A3–C5/C4–F5/F4–C♯5/C♯5–E5/E5.

The Viola Campaniça is a steel-stringed musical instrument from Vila Verde de Ficalho in the Serpa Municipality in southeastern Portugal. The name viola campaniça means viola from the countryside.

The Viola Amarantina is a steel-stringed musical instrument native to Amarante in northern Portugal. Since it has two heart-shaped frontal openings, it is also known as Viola de Dois Corações (viola with two hearts).

A traditional viola amarantina has walnut sides, a mahogany neck and a soundboard made from pine.

The Viola de Arame is a steel-stringed musical instrument from the Portuguese island of Madeira. It has 9 strings in 5 courses, and the scale is roughly 56 cm. The second highest course consists of a single string; all the other courses are 2-string courses.

The Viola da Terceira is a stringed musical instrument from the Azores, where it is especially associated with the island Terceira. An alternative name for this viola is Viola Terceirense.

The viola da terceira looks a bit like a small twelve-string guitar but with an extended headstock. The sound box is shaped like the figure 8 (just like a standard guitar), with a circular sound hole in the centre (which makes it look even more like a guitar). The fingerboard is fretted; usually with 18 frets.

There are three main versions of the viola da terceira:

Violas and various other string instruments were brought to the Azores by seafarers from mainland Portugal. The historian Gaspar Frutuoso (c.1522 – 1591) mentions the viola in one of his texts about the Azores, but without saying what kind of viola it is. There is also an old Azorean real estate transfer record from 1479 that mentions how the property-owner received four rams and a viola in trade.

Over time, the violas constructed on the Azores developed into something unique to this archipelago.

On the Azores, a tradition developed where a viola came to be regarded as an essential part of a groom’s marriage dowry.